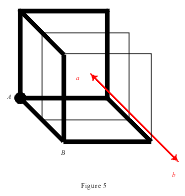 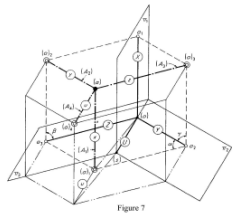 Leonardo da Vinci’s fresco, Last Supper, 1495-1498, is the most noted example of one-point perspective because its compositional lines are blatantly apparent and it still exists.  The compositional lines appear as the edges of the tapestries, walls, ceiling beams and table. When visually continued, these lines converge with the line of sight at the point of infinity (marked by the figure of Jesus) to create an accurate diagram of one-point perspective.  This line of sight is also perpendicular to the projected plane, in the middle ground, on which the figures of the apostles are arranged. This plane divides the space in front of the figures from the cavernous space of the room behind the figures. The relevant aspects of this composition are the following.  There is a line of sight (a one-dimensional line) perpendicular to a two-dimensional plane that can be seen as dividing the whole image. For more details and diagrams about pictorial compositions, see Martin Kemp’s book, The Science of Art.

Perspective was studied by many people during the Renaissance.  Leon Battista Alberti is credited for writing the first treatise on centric perspective entitled De Pictura, 1435.  The most authoritative and cited English translation to date is by Cecil Grayson entitled On Painting and On Sculpture. The origin of geometric perspective in art would not be complete without mentioning Alberti’s dedication in 1436 of his treatise to Filippo Brunelleschi. Brunelleschi is alleged, by his biographer Antonio di Tuccio Manetti, to have created the first two, now lost, paintings of scenes in perspective of Florence, Italy.  The exact dates of the panels are not known; however, in Samuel Y. Edgerton’s book, The Renaissance Rediscovery of Linear Perspective, Edgerton dates at least one of the panels to pre-1425 because of other paintings by Masaccio and Masolino dating from circa 1425-1427.  Edgerton’s research is reified with a photographic recreation of Brunelleschi’s first painting in perspective. The writings of William M. Ivins, On the Rationalization of Sight and particularly Art and Geometry, link the understandings various cultures throughout the ages had of optics and geometries to the developments of linear perspective and modern geometries. Irwin Panofsky’s book, Renaissance and Renascences in WesternArt, thoroughly documents the aesthetic developments leading to accurately scaled, realistic images in perspective.  The Fourth Dimension and Non-Euclidean Geometry in Modern Art by Linda Dalrymple Henderson addresses more recent explorations between the arts and n-dimensional geometries. Clifford A. Pickford's amusing book Surfing Through Hyperspace: Understanding Higher Universes in Six Easy Lessons uses humor, something this subject really needs. Many great writers have documented the connectivity of art and geometric techniques during the past six centuries.

Refer back to da Vinci’s Last Supper.  The composition of this fresco should allow one to see how photographic or two-dimensional naturalistic images in perspective can be used to represent the three-dimensional spaces in a four-dimensional space.  In another fresco (by Masaccio, entitled Trinity) an architectural like frame is painted around the “window” while two figures of people and an altar table with a tomb below are painted on the “picture plane” in front of the “window”.  This masterpiece, probably dating from the latter part of 1425, contains all of the compositional devices one needs to comprehend the introduction of photographic or two-dimensional naturalistic images in perspective and naturalistically scaled sculptural imagery into higher dimensional spaces.

We only have to know some of the geometry’s basic notions to understand this development.  All of the geometry being referred to is from the book Four-Dimensional Descriptive Geometry by C. Ernesto S. Lindgren and Steve M. Slaby.  The basic notions being referred to are called the conditions of perpendicularity. Those conditions are four statements specifying the perpendicular relationships of the four reference lines forming the six two-dimensional planes and four three-dimensional spaces in a four-dimensional coordinate system. The following four requirements for a four-dimensional coordinate system, from page 22 in their book, are similar to the mutually perpendicular requirements of the three lines and three planes in a three dimensional Cartesian coordinate system.

1. The four spaces of the system, taken in threes, determine the four lines that are perpendicular to each other and belong to the same point.

2. Four lines, taken in threes, determine the four spaces that are perpendicular to each other.

3. Four lines, taken in pairs, determine six planes, which, taken in threes, form four groups of planes belonging to the same line and are mutually perpendicular.

4. Any one line of the reference system is perpendicular to a space determined by the other three lines in the system.

These four statements provide a verbal description of a four-dimensional coordinate system.  While Figure 6, from page 17 in their book, as a diagram provides only a visual indication of the conditions of belonging and not the conditions of perpendicularity. In other words, it just shows the lines belonging to certain planes and spaces, not the perpendicular relationships among the lines, planes and spaces. (Note: the lines have been
given numbers and the planes have been given lower-case Greek letters).

When their book was published in 1968, Lindgren and Slaby used Figure 7, amongst many others, to illustrate all of the perpendicular alignments of the elements in a four-dimensional coordinate system.  Their publication still stands as the definitive treatise on four-dimensional descriptive geometry.

Luckily, there is a way to show everything in those diagrams using four images or sculptures of natural people standing on natural ground to indicate the proper relationships of the three-dimensional spaces in a four-dimensional space.

This can be achieved by applying the conditions of belonging and perpendicularity to four lines of sight, just as they can be applied to four reference lines.  This does not just mean the images of spaces in perspective and naturalistically scaled sculptural images must be placed in the correct three-dimensional space in the four-dimensional system – meaning placing the image of space 1 in space 1 in the coordinate system. It means the lines of sight with accompanying images must visually belong to certain lines, planes and spaces in the system while being perpendicular to other lines, planes and spaces in the system.

Keep in mind, when dealing with realistic imagery two sets of aesthetic issues have to be addressed to present all of the relationships of the lines, planes and spaces inside of a four-dimensional coordinate system. The first aesthetic issue involves compositional lines and planes of an image in perspective; each of the four images should have obvious foregrounds, middle grounds and backgrounds and unobstructed lines of sight.  The second issue involves the visual distinctiveness of the subjects or figures in the images; each one of the four images should contain four visually distinct subjects or figures so as to be readily identifiable with one of the four distinct spaces.  Each of these aesthetic issues should complement the other.  Consequently, the compositional elements of the images must not only belong to the corresponding elements of the spaces in the four-dimensional coordinate system, the lines of sight in each image (just like the reference lines) must clearly be perpendicular to the correct three-dimensional space inside of the four-dimensional coordinate system, and the subjects or figures in the images should also show in their own backgrounds an image of the space it must be perpendicular to in the four-dimensional coordinate system. In this way the introduction of naturalistic imagery adds extra requirements that need to comply with the requirements of the geometry. However surprisingly, the end result of this complex compilation will be works of art free of obvious geometric notations  (notations being letters, numbers or lines) that readily exhibit all of the aesthetic and geometric aspects of this amalgamation.

These four images can be derived from three points in opposition (meaning three points in a row).  The two images taken from the two outer points must be directed toward the central point, while the other two images taken from the central point must be directed toward the outer points. This pattern establishes a direction for the lines of sight that correspond to the needs of the reference lines to intersect some of the other reference lines at perpendicular angles.  In an effort to ingest as little as possible let these reminders suffice.  Lines of sight can be interpreted as emanating from the viewer or from the subject (see William M. Ivins’ writings on the study of optics during the Middle Ages).  Now back to the assimilation of the images to the geometry.  Each of these images of spaces must simultaneously represent a line, plane and three-dimensional space within a four-dimensional coordinate system. This is achieved when the spaces are numbered (from left to right) 1,2,3,4 and respectively designated with reference or projection planes µ, η, α, ß and reference or projection lines 3, 1, 4 and 2. Planes γ and δ, the other two planes in the system, must be mutually perpendicular to planes µ, η, α  and ß. These relationships occur when plane γ shows the ground or horizontal plane of spaces 2 and 3, and plane δ shows the ground or horizontal plane of spaces 1 and 4. The side of viewing the spaces between the three points in opposition does not matter or if the photographs are numbered from right to left, as long as space 1 is associated with plane µ and line 3, space 2 with plane η and line 1, space 3 with plane α and line 4 and space 4 with plane ß and line 2; the geometry is composed of reciprocal statements therefore the result will be the same four arrangements. The reciprocal nature of this geometry allows for, at least, these two aesthetic interpretations of any space chosen to illustrate a four-dimensional coordinate system.

The alignment of these four figures in their natural spaces can be seen during the first 15 seconds of the computer graphics. It is aesthetically relevant to note the slightly staggered from center alignments of the man, woman and tree to allow for unobstructed lines of sight through the four spaces.

The first few seconds of the graphics shows a fly through to the central point in the natural space. This is also the image of space 3 containing the figure of the woman in space 3 and the diminutively scaled figure of the tree in the background on reference plane α; the tree is actually in space 4.  At this central point in the natural space the camera turns to face and fly towards the same image in the four-dimensional coordinate system. As the computer’s camera enters space 3 in the system, it follows the line of sight, parallel to reference line 4, through space 3 to ultimately be perpendicular to space 4 with the tree in it.

Different arrangements of the four fluctuating reference lines would provide aesthetically correct variations of the geometric requirements. In regards to the fly through of space 3, when reference lines 1 and 2 are simultaneously perpendicular to reference line 4 an isometric cube or space would form.  The naturalistically scaled sculptural image of the woman in space 3 would not be subject to diminution because the sculptural imagery in the space must be available for 360° inspection, just as it was in the natural space.  At this point, it would become aesthetically viable to have a diminutively scaled image of the background of space 3 (which is the tree in space 4) on reference plain α. This would provide another aesthetic presentation of the perpendicular relationships of reference line 4 to space 4. The same aesthetized arrangements of the reference lines could also be applied to the reference lines forming the other spaces. 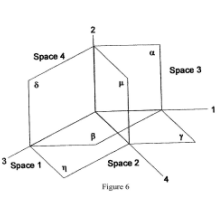